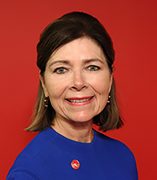 Dr. Joanna Groden currently serves as the Vice Chancellor for Research at the University of Illinois Chicago. She completed her BA degree in Biology at Middlebury College, a PhD in Cell Biology and Genetics at the Cornell University Graduate School of Medical Sciences, and a postdoctoral fellowship in the Department of Human Genetics/Howard Hughes Medical Institute at the University of Utah.

Prior to coming to UIC, Dr. Groden served as Professor and Vice Chair for Academic Affairs in the Department of Cancer Biology & Genetics at The Ohio State University (OSU) College of Medicine. She joined The Ohio State University faculty in 2005 and served in various administrative roles in the College of Medicine, such as Associate Dean for Basic Science Research from 2007 to 2011, Associate Dean for Graduate Education from 2011 to 2013; and finally as Vice Dean for Research from 2013 to 2017. Most recently, she served as the Co-Director of the Biomedical Sciences Graduate Program, Director of the Pelotonia Fellowship Program and the Education Program Leader for the OSU CTSA-supported Center for Clinical and Translational Sciences. Prior to her tenure at OSU, she served on the Molecular Genetics, Biochemistry, and Microbiology faculty of the University of Cincinnati College of Medicine from 1993 to 2005 and, during her last two years there as the College of Medicine Vice Dean for Research. She was previously appointed as an Assistant Investigator of the Howard Hughes Medical Institute (1997-2004).

Dr. Groden is a human geneticist, who is internationally recognized for her research in identifying key genetic causes of colon cancer and other inherited cancers through the identification and characterization of two human disease genes. Her research has been continuously funded by the National Institutes of Health since 1994. Dr. Groden has served on several boards and advisory panels including the NCI Board of Scientific Counselors, and actively participates in the peer review process for AACR, NIH, DOD, and many other national and international funding agencies and scientific journals. With numerous publications and patents, Dr. Groden has been elected as a Fellow of the American Association for the Advancement of Science (AAAS) and a Fellow of the American Gastroenterological Association.