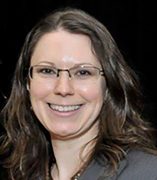 Jacquelyn Jancius is currently the Director of the Conflict of Interest office in OVCR. She began her career at UIC in 2006 as the Conflict of Interest Coordinator. Prior to joining UIC, she was a Peace Corps Volunteer in Romania working on non-for-profit institutional development (2004-2005). Her previous work experience includes working for a law firm (2002-2004). Prior to that, she served as the dean of instruction and an academic advisor for a major online university (2001-2002).